I had first seen Cervejaria Ramiro on Anthony Bourdain’s No Reservations episode on Lisbon. Known for serving a huge variety of fresh seafood with grilled steak sandwiches for “dessert”, it was on my short list of places to visit in my trip to Portugal. I had plans to meet my friend Flavia from Brazil for dinner, as she happened to be passing through Lisbon on a layover that night. Flavia and I were roommates on my very first night in Goreme when I was still just a tourist in Turkey, so I was looking forward to seeing her again after living there for ten months now.

I was also lucky with my choice of a hostel in Lisbon, We Love F*** Tourists, which has some of the nicest staff I’ve met anywhere in the world and who cheered my interest in going to Ramiro. I was honored that a whole group from the hostel staff was able to join Flavia and I for my last night in Lisbon. It’s always more fun to try out a new restaurant with a food-loving group!

There is usually a bit of a wait to enter the restaurant, but we were seated in about ten minutes in the upstairs dining room. We walked in past the tanks of live seafood, waiters waiters weaving through with plates straight from the bustling kitchen, and my mouth began to water in anticipation! We started with pata negra (acorn-fed Iberian ham) and a soft cheese from Azeitao to spread over fresh buttered bread. Next came shrimp sauteed in butter and garlic, tender steamed clams and some of the biggest raw oysters I’ve ever seen. 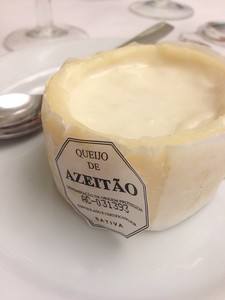 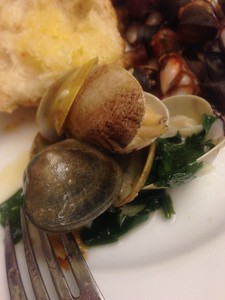 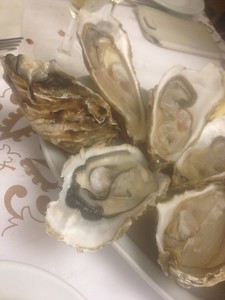 It was my first time trying goose barnacles (such a strange look, with a taste a bit like clams) and sea snails (like briny escargot, pried out of their shells with little forks). My favorite of all of the dishes were the giant tiger prawns, grilled simply and seasoned with thick flakes of sea salt. I thought they were joking when they brought out a huge live lobster — I was SO full by that point — but minutes later it appeared on the table too. 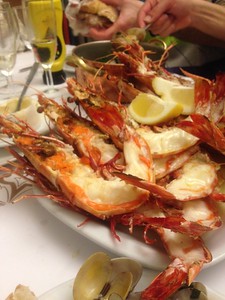 It was such a treat to be able to sit back and let someone else do the ordering for a change, and I knew we were in good hands when we let Pedro order. Service was a bit slow at times as the staff catered to tables of tourists around us. (Our server also took a selfie when asked to take a photo of the table, haha!) Having locals who’d been there before helped, Pedro and our server went back and forth in rapid Portuguese, making sure to include a variety for all of us to share. Of course, we had to end with the famous prego steak sandwich for “dessert” and everything was paired with appropriate beverages along the way – white wine from the Duoro valley to start, beer when we got to steak and a lemon sorbetto topped with vodka to put you just over the top!

As you can probably tell, the food was amazing but the company was even better. Truly a highlight to my too-short stay in Portugal. Obrigada, friends!

If Portugal is not already on your travel bucket list, add it now! Here’s some inspiration, and both shows happen to feature Cervejaria Ramiro prominently: