You might say I’m crazy. I just waited over three hours – in the rain – to stand in a room full of artificial rain for all of ten minutes. Oh, the irony. Sweet, sweet irony.

Was it worth it?

I have to say that it was. But not for the reasons I thought. I thought that I would get some amazing photos. I studied the live stream of photos from Instagram, Twitter, and Flickr with current images to see which angles worked best and to get ideas. I tweeted @MuseumModernArt to get advice on how early to wait in line. (They tweeted back, great customer service!) I planned on being first in line to reduce my wait to the minimum of three hours I’d been hearing was the norm.

I won’t lie, it was pretty miserable. The weather was cold and rainy as remnants of a tropical storm headed for Manhattan. We started the line around 8:30 on the nonmembers side, while lucky MoMA members and their guests lined up for the members only hour which started at 9:30. 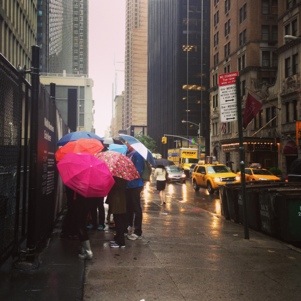 Once the nonmember line was allowed to join the members who had been there for the preview there was still another hour or more of waiting ahead of us in front of the exhibit. Glad to be at the front of the line, we chatted with a few others behind us who had attempted to get in before, but given up as wait times approached five hours. Five hours! Yet they came back. 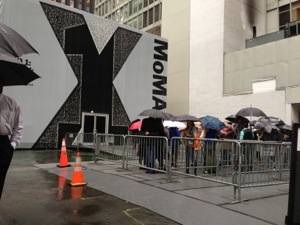 Once you get to the front of the exhibit itself keep in mind there’s still another line inside. It took about 15 minutes to get to the front – only ten people at a time are allowed to walk in the actual rain. Once you walk out of it, you must leave. Signs posted around the front (and the security guards) will remind you to keep your visit to ten minutes or less as a courtesy to those waiting behind you. 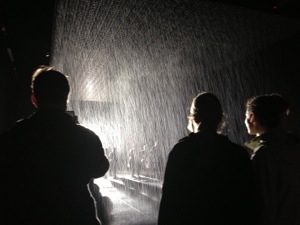 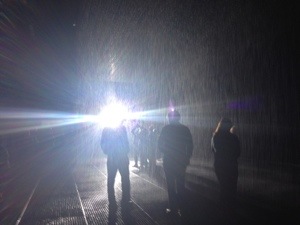 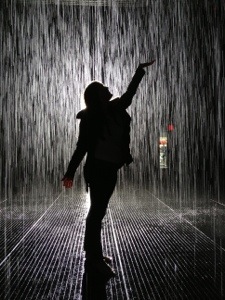 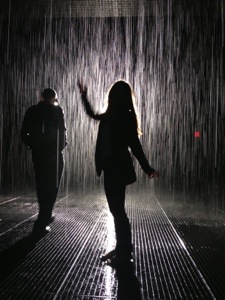 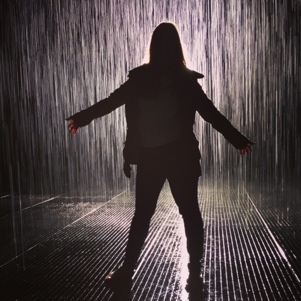 The actual experience was really so much more fun than I was expecting. After the anticipation of standing for so long in the lines, I felt like a kid waiting to be let out to play in the rain! As you let your eyes adjust to the dark room, you’re surrounded by the squeals and laughter of those ahead of you and the methodical clicking on and off of the “rain” being let out of the top of the exhibit. The spotlights from various points allow you to watch the rain falling through the light and produce the various images that everyone has come to capture for the ‘gram, but be sure you also just take a moment to be a kid playing in the rain. Let your eyes wander through the blinking rain drops and the way they catch the light and shadows. I suppose the only thing missing is the feeling of abandon when actually standing out in the rain. But then again, you can get that just from standing in line. 😉 What a joyful experience!

>> For where to eat in NYC, check out my collection of restaurant recommendations here.