Most of the land mass of Turkey actually falls into the continent of Asia, but I’m filing this under my Europe Destination Guides since a good chunk of Istanbul is in the 5% which lies in Europe and the country has been in talks about joining the EU… I came to Turkey thinking I would stay up to two months, perhaps travel a bit in some of the surrounding countries. More than a year later, I’ve completely fallen for this country, the food, the history, the beautiful natural wonders and the people. I spent a year and half based in Goreme, in the beautiful Cappadocia region of central Turkey, and have recently moved to Istanbul. I still do travel as much as I can!

Before we begin…
In the time that I’ve been in Turkey, there have been incidences of terrorism in 2015 as well as an attempted coup in 2016 and ongoing domestic problems. Most of what you see on the news is dramatic and all bad news, so I’m often asked if I am safe here. Here are two posts by expat living in Turkey who very eloquently sum up my feelings as well: Am I Safe in Turkey? and Is Turkey Safe from ISIS and Terrorism? In short, I am happy living in Turkey and wouldn’t make plans to leave based on fears over terrorism, which can happen anywhere in the world – in fact, European cities like Paris, London, Brussels, etc have had more frequent trouble than Turkey recently… It’s always good to practice common sense and to stay informed, but Turkey is a large country and life goes on as usual for 99.99% of the people living here. Ok, enough about that. Hope you enjoy your visit to Turkey, as I have!

The following are some of my suggestions for regions of Turkey that I’ve either been to myself, or places that I am hoping to see soon. I’d love to add your recommendations to the list! Feel free to leave a comment below. =)

Things to Do in Turkey 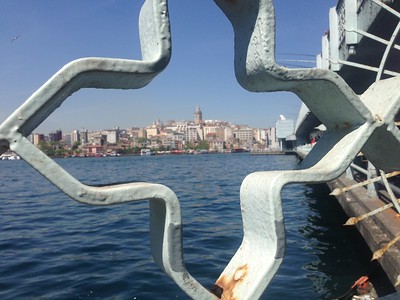 Istanbul – Famous sights in Sultanahmet (Old Town) include: Hagia Sophia, Blue Mosque, Basilica Cistern, Topkapi Palace and it’s harem. Orkatoy District (along the Bosphorus) – Feriye Lokantasi serves Ottoman cuisine, best spots for kumpir. Kempinski Hotel for a drink on the water at sunset. Cihangir (trendy/hipster district) – try Turkish breakfast at Van Kahvalti Evi. On busy, modern Istiklal street, try Turkish BBQ at Zubeyir Ocakbasi. Visit a hammam (Turkish bath) for the full scrub down bathing experience. Love this list compiled by TurkishTravelBlog.com of 8 Cool and Unusual Things to Do in Istabul, like taking a jewelry workshop with a master jeweler in the Grand Bazaar or a food tour in the old city with the food editor of Vogue in Turkey. Culinary Backstreets has a fantastic list of culinary walks and cooking classes in Istanbul. One of the cheapest and easiest ways to get around is with an Istanbulkart, which gives you discounted rates on the all of the (already reasonable) modes of transport in Istanbul. For less than a dollar, you can snap photos while you take a lovely 15 or 20 minute ferry ride over to the Asian side of Istanbul. I especially enjoyed spending an afternoon in the fishmarket area of Kadikoy, which is just blocks from the ferry that arrives from Eminonu. (Good summary of ferries here.) Another option on the Asian side is the terminal at Uskudar, where you will find cafes where you can pick a cushion to lounge along the seawall near Kizkulesi (Maiden’s Tower) and enjoy Turkish tea or coffee as the sun sets over the Bosphorus. Watching or chatting with the fishermen as you cross the Galata bridge is entertaining and a practical way to get to lunch at the floating kitchens in Eminonu where you can try Balik Ekmek (which means “fish bread”) before walking around the historic Spice Bazaar.

>>For restaurant suggestions and an easy way to see most of these spots with a map view, check out my Istanbul list on Foursquare & Istanbul Photo Gallery. There’s also a (mostly Istanbul-specific twitter feed embedded if you scroll to the bottom of this post, which is helpful for the absolute latest news. 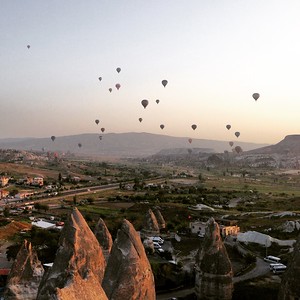 Cappadocia – Cappadocia is known as the Land of the Beautiful Horses and it’s definitely a unique place in all the world. Any photo you’ve seen of Turkey likely includes hot air balloons rising over the surreal landscape of the region, full of “fairy chimneys” created by volcanic activity and further carved into churches, houses and hotels. A ride in a hot air balloon at dawn is a must, but if you absolutely can’t fit it in to your budget, I’d highly recommend getting up at dawn to head to sunset point, which will allow you a panoramic view over the valley as the balloons float past. If you’ve got limited time, there are a variety of day tour packages that take you around the sights of the region. I enjoyed the Green Tour (Southern Route) which included a lovely walk down Ihlara Valley, time to explore the nooks and crannies of Selime Monastery, a visit to the famous undergound city of Derinkuyu and a stop for photos over Pigeon Valley on the way back to Goreme. If you’d prefer to DIY, renting a car would be helpful (public transport can be a bit sporadic) and if you can, try to go very early or late to avoid crowds. You could also visit the underground city of Kaymakli, which I thought seemed less crowded by tour groups. The Goreme Open Air Museum is only 1km from town and consists of a variety of churches carved into the caves in the valley. Other activities on offer include sunset ATV tours of surrounding valleys, horseback riding, cooking classes, and Turkish Night dinner shows which include the famous whirling Dervishes. Testi kebap (“pottery kebab”) is famous from this region and there are also some great Turkish wines to try from Central Anatolia, particularly the Emir (white) grape or the Kalecik Karasi (red). Wine tasting can be done in nearby Urgup (Turasan Winery) or Uchisar (Kocabag winery), which was my favorite. The town of Avanos to the North is home to master pottery workshops where you can try your hand at the wheel, or just take a walk along the Red River.

Gaziantep – A food lover’s dream, Gaziantep is located in Southeastern Turkey and is somewhat off the beaten path of most travelers, who stick to Istanbul and Turkey’s beaches, then perhaps go inland far enough to visit Cappadocia. For me, it’s a must on my itinerary with its reputation for the finest cuisine (like pistachio baklava!), excellent restaurants, cooking classes, and even a culinary museum! My culinary to-do list here included: pistachio baklava from Imam Cagdas or Kocak, getting up early for beyran at Metanet Lokantasi, excellent kebap at Kebapci Halil Usta (kusleme is a type from Gaziantep), katmer at Zekeriya Usta and menengic coffee from Tahmis Kahvesi. For in-between food stops, there’s the Zeugma Mosaic Museum (with its famous work called Gypsy Girl), the Coppersmiths’ Bazaar, Gaziantep Castle and endless markets and winding streets to wander in the old city. (*Note: Gaziantep is currently listed on many travel advisories due to it’s location near the border with Syria. It’s a shame, because this is also what’s lent it such an amazing food culture and it was one of my favorite stops in Turkey. That being said, please be aware if you do decide to travel in this region.)

>> For photos from my travels in Turkey, please start with my Turkey Photo Galleries.
>> Search for Culinary Vacations in Turkey.

What to Eat in Turkey

>> If all this talk of Turkish food is making you hungry, you should definitely check out some videos from popular Turkish chef Refika Birgul. (Note: the Turkish version  of the channel has even more videos, most have English subtitles available too!)
>> A great list of some of the best bites in Istanbul from J. Kenji Lopez-Alt of Serious Eats.
>> Anthony Bourdain’s Istanbul Restaurants List

What to Drink in Turkey

Please put Marmaris in your do list next time , it will be my pleasure to take you around and show you this beautiful town in Turkey.

Thanks so much! I’m actually going to be heading down to Antalya and Fethiye in May/June. Perhaps I can make a stop in Marmaris as well. Feel free to send me an email at malia (at) shoyusugar (dot) com.

What a great post! Thank you so much for sharing.

You’re very welcome. Thanks for reading!