When I first moved into my apartment it was unfurnished. In Turkey that means a complete blank slate: no appliances, curtains, not even light fixtures. I felt excitement at being able to fill up my space thoughtfully, surrounding myself only with carefully-selected things I loved. 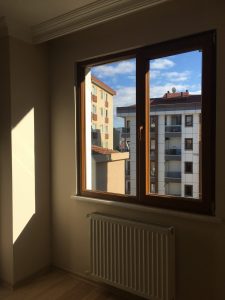 But at the same time, furnishing a whole 2-bedroom apartment was a challenge. I had to go piece by piece, prioritizing what to get first and what could wait. I also decided to try to purchase as much as I could second-hand so I scoured a nearby street full of second-hand shops each week, practicing my Turkish to inquire about prices and to negotiate delivery. I enjoyed the process, accepting tea with some of the shop owners and taking the time to chat when I could.

I first purchased a set of two armchairs and a couch. The couch served as my bed, office and dining table for the first two months or so! I slept out in the living room, without curtains to cover my wall full of windows on the narrow side of the room. The windows opened up to a slim balcony and faced my neighbors’ kitchen windows, so I tried to position myself facing away from them when I could for some semblance of privacy.

If you spend any time in Turkey you’ll notice that elderly neighbors can be… let’s say, curious. In the cities, they’re often watching the street below from the windows above. In the villages, old men sit at the neighborhood tea house and old ladies may be perched on their front steps or chairs placed outside so that passersby can check in on their way past. In Turkey, elders serve as clearinghouse of neighborhood gossip, or perhaps even a kind of neighborhood security. While it can be unnerving to feel like you’re being watched, at first, for me I think this type of “big brother” is much more benevolent than the AI-targeted face scanning tech people are worried about in other places around the world. As with anything, it just takes some getting used to.

When I first moved in I most definitely was NOT used to it. The kind-looking old man who lived in the apartment across me would look out the window seemingly every hour – smiling as he took in the scene below, sometimes calling out to others who were also at their windows or on the street. I’m sure I stood out as a bit of a curiosity in the neighborhood – a foreign woman living alone (without curtains – gasp!) yet he always greeted me with a smile when we were at the window at the same time. Later, he added a wave of his hand, then placed it over his heart. We didn’t need to speak the same language for me to feel the kindness in his gesture.

One winter morning when I was a bit under the weather, I decided to head out to purchase some cold medicine at the pharmacy and a caydanlik, a kind of stacked double teapot in Turkey used to prepare Turkish tea. There was a light snow falling and it felt good to be out in the cool, fresh air. As I turned toward the pharmacy, I saw my neighbor on the street. He asked where I was going and I told him, and he told me to stay warm and get well soon. We smiled and went our separate ways. After the pharmacy, I passed him again on a different road and this time, he asked if I wanted to stop for tea.

It’s been nearly five years that I’ve lived in Turkey, and I’m embarassed to say that my Turkish is still barely at the intermediate level. But on this occasion, I realized it was enough to hold a basic conversation and I learned that my neighbor was 79 years young and he’d worked in an auto factory in Germany before coming back to Turkey. He has four children, three of whom are married and also living in our neighborhood – he was on the way to visit one who worked nearby at a taxi stand. His youngest daughter wasn’t married and she still lived with him and his wife. I showed him photos of my family as our teacups were refilled and delicious savory pastries kept appearing at our table. It was a lovely way to lift my spirits before setting out for the rest of my errands.

On another occasion, I was going through some health problems that caused me to slowly lose all of my hair – it was a difficult time for me and I felt quite self-conscious. When going outside, I could easily hide it under a hat, but at home I usually left my head uncovered. One day during a delivery, my postman asked one day if I was sick, and I decided I should start using a bandana or something as a covering in order to avoid unwanted attention, even at home.

Later, while I was cleaning up after dinner, I saw my other neighbor holding up a sign in her window. It was dark so I couldn’t read it, but I assumed it was her phone number. I called out to her that I couldn’t see and asked her to tell me, then wrote down the numbers and gave her a call. When she answered, I realized that she had been watching and worrying about me the whole time and asked if I was sick or needed to go to the doctor. I assured her that I’d been to the doctor and thanked her for her concern.

A few weeks later, she waved to get my attention at the window and held up a grey knitted hat that she’d made for me! I walked across the street to pick it up from her and to thank her for being so thoughtful! It became my favorite hat to wear for the rest of the winter – so warm and knitted with love!

Small gestures like these make me feel included and welcomed as a part of the community here in Turkey. Hopefully as my Turkish improves, I’ll be able to learn even more from them!

Love this story. Glad to hear you’re developing a small family across the world to take care of you and watch over you!

I feel like it’s possible to develop a community no matter where you are in the world, if you reach out and keep and open mind. I’m grateful!

I loved reading this! What sweet neighbors you have to care for you!

The hat totally blew me away! So sweet.

Thanks Malia~ I always enjoy your blogs. 🙂

Aww thanks for reading, Mike! Hope all is well with you and the family! I saw that you’re a grandpa now! 😉

I love this so much. Happy your neighbors are looking out for you. Has it really been 5 years!?!?!!

Time flies, right? I guess you can blame the pandemic now, but you STILL have yet to visit me…