Skip to the content
The first time I can remember catching a real train (the Sugar Cane Train and the Pearlridge Monorail don’t count) was the summer after I graduated from high school, when I spent three months backpacking around Europe before heading off to college. My friend Meghan and I bought the Europass option that allowed us 8 days of train travel over a 2 month period and we made use of it by visiting France, Spain, Italy, plus a last minute addition of Prague when we gained one extra leg where the conductor forgot to punch our passes.

I loved it even more than I loved airplane travel, simply because it allowed us so much more room, huge viewing windows and freedom to walk through the cars. Growing up in Hawaii, we have no need for a long-distance train, so I find that in my adult life – whenever the routing allows – I try to book train travel to get me at least part of the way to my destination. 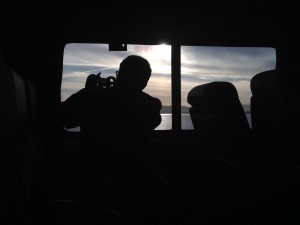 Since that summer in Europe, I’ve also taken trains in the Northeast US – I remember heading from NYC to West Point one autumn when the leaves were changing color because I sat glued to the window in awe. (Leaves don’t change in Hawaii either.) In 2008 when we traveled in Asia, I frequently caught the overnight train between Chiang Mai and Bangkok, enjoying the ride even when I was squished up in my sleeper bunk, rolling around and hoping I wouldn’t fall out in the night. One particularly memorable train ride came in 2011, when I’d talked Jess, Eric and Edwin into coming with me from Seattle to Vancouver for my TBEX Conference. On the way back to Seattle, Eric got down on one knee and – with the help of Edwin and I (and the train crew) – shocked Jess by proposing while he played “their song”.

Portland to LA on the Amtrak Coast Starlight

This trip, I had the chance to piece together trips on an Amtrak route that I’ve always been curious about. The Amtrak Coast Starlight actually starts in Seattle and runs all the way to LA, but I opted to catch it from Portland. This portion of the route takes a whopping 30 hours because of the stops, but it really didn’t feel that long until maybe the last couple of hours once the sun had set. It was also one of the most productive trips I’ve had. There is no wifi available yet on this route, which I at first thought would be a hindrance but was really a blessing in disguise. Without constant connection to the internet, I was able to slow down, unplug and to really soak in the experience.

We left just around 2:30pm from Portland and arrived in Los Angeles about an hour ahead of the posted schedule, at 8:15pm the following day. The best part of the trip was watching the scenery change as you head south.

I’ve heard that the Northbound leg of this trip is even more scenic, as we missed out on the mountains of the Cascades overnight from Portland. I’m going to have to compare someday by taking it in the opposite direction! If you’ve done the train Northbound, feel free to leave a comment with your experience! For now, here are a few tips if you’ll be traveling Southbound on the Amtrak Coast Starlight from Portland (or Seattle) to Los Angeles.

Question about the frequent stops: do you actually have the option to get off and get back on? I am planning on taking a road trip and Seattle, Portland, and LA happen to be the three cities I chose to go to. If I take the train, will I get to actually stop in these cities or no?

Hi Layla, I think you could but the ticket price may be different if they consider them as multiple point to point tickets… But check with Amtrak to be sure! 🙂